This Special Skill defines the so-called perimeter weapons and pieces of Equipment that move around their bearer.

The detonation of a Perimeter Item can only avoided by successfully making a Dodge Normal Roll.

With the last Order of the Order Pool of his Combat Group Akinyi declares a Move + Move Order. He moves up to a wall with his CrazyKoalas following him. During his adversary's Active Turn the Fusilier Angus, who is on the other side of the wall, declares the first Short Skill of an Order: Move. This activates the two CrazyKoalas, because he is inside their Zone of Control, so they declare Boost and their trajectory: CrazyKoala #2 will move around the wall to impact on Angus at the beginning of his movement while CrazyKoala #1 will move around the wall from the other side to impact on him at the end of his movement. Seeing that he is in range of the two CrazyKoalas, Angus, desperately declares the second Short Skill of his Order, Dodge. He must succeed at a PH Normal Roll to avoid the two Attacks. His PH Attribute value is 10, and he rolls a 5, succeeding at the roll, so he dodges both Attacks. CrazyKoala #2 activates and runs towards Angus when he is starting his movement, getting into base to base contact and detonating automatically. Meanwhile, CrazyKoala #1 activates and runs towards Angus from the other side of the wall, entering in base to base contact and detonating at the end of the Fusilier's movement. But, since Angus succeeded at his Dodge roll he doesn't suffer damage and the CrazyKoalas must be removed from the table.

If Angus had failed his PH Roll, then he would have to make two ARM rolls against Damage 15, applying the Shock Special Ammunition rules, removing the CrazyKoalas from the table after detonation. 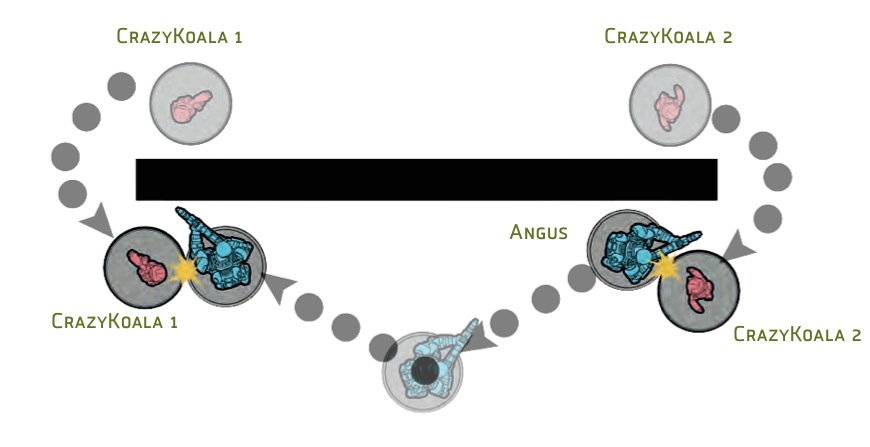 Within military confines, the term tactical perimeter devices is used for automated zone defense systems. These devices have been specifically designed to protect the immediate perimeter of their user, and also to detect and/or dissuade intrusion attempts during the user's security duties, either within a zone of operations or in especially sensitive facilities.